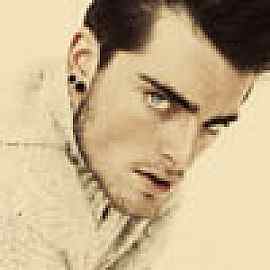 In Amberground, it is the job of the Letter Bee to deliver the letters of the people... whatever those letters may be. The story opens with us meeting a diligent Letter Bee by the name of Guache Suede. He and his dingo (the name given to the Letter Bee's helper companion... which can be anything from a dog to a man... in Guache's case, it's a dog named Roda)are on their way to pick up a letter, which turns out to be Lag Seeing, a small boy who has been left handcuffed to a post with a mailing slip stuck to him. We quickly learn that this is not an unexpected letter... and that Guache is dedicated to his job. Lag is distraught, having recently been separated from his mother, and is upset over the fact that Guache will not be his friend, since a Letter Bee never befriends a letter. Plot: This first volume is primarily about Guache Suede delivering Lag Seeing to his destination. Along the way, Lag is witness to heroic feats and true class in the form of Guache, and decides that when he grows up, he too will be a Letter Bee... both because he sees it as highly honorable to deliver the heart felt messages of the people, and because Letter Bees are allowed into Akatsuki, the capital, the place where he believes his mother was taken. However, by the end of the volume, we see Lag off to begin his journey to take the test to become a Letter Bee. Inspired by the bravery and dedication of Guache Suede, Lag has stayed true to his word and hopes to cross paths with the man who inspired him, once he reaches the capital. On his journey to take the test, he picks up his dingo, a strange girl with amazing powers. Truthfully, I was hooked from the get go... I love the concept that these Letter Bees are out there delivering anything and everything... and Guache is such a wonderful opening character. He's likable, heroic, and motivated by the purest of intents. Definitely someone I would want my main character patterning himself after. Characters: Lag Seeing: The main character, he starts the story as a young child and we see him grow to the point of going to test to become a Letter Bee himself. He's still incredibly young (12? I think?) and he's quite the cry baby, but I find his sniveling endearing. He's not a hard, manly character at all, he's obviously an emotional child who cares a lot about everyone. Guache Suede: A valient, heroic, likable character who becomes Guache's model for how a Letter Bee should behave, and rightfully so. Guache is motivated to become the top Letter Bee to save his sister and move her into the big city. Niche: A 'Package' that Lag finds on his way to taking his test... her shipping label had been damaged, which results in her remaining chained up for several days until someone comes and lets her free. Lag, having been a chained up letter himself, hates this and releases her. She is small, precocious and lacking in underpants (something that horrifies and is then remedied by Lag). She also has powerful abilities, because she is the daughter of a mythical creature... thus making her Lag's perfect dingo... and pretty much saving his butt in almost any fight they encounter. Roda: Guache's dingo, a dog who takes a liking to Lag immediately and shares his hatred of the food Guache prepares. Sylvette: Guache's younger sister whom he is trying to help. Sabrina Mary: Lag's aunt, and the person Guache is to deliver Lag to. Conner and Gus: The Letter Bee and his dingo who are to accompany Lag to take his test. Art Style: The illustration in this manga is beautiful. It is detailed, well crafted with beautiful line weight, color (where applicable) and excellent proportions. The expressions are quite lovely too. Believability of World: This is a well constructed, interesting world that I'm very excited to find out more about. Overall: A